Since the development of great early civilizations, man has been aware of the need to have a system to dispose of waste and have free, convenient access to water. Therefore it is no surprise that one of the earliest plumbing systems were copper water pipes found by archaeologists in the palace ruins of the Indus River Valley in India around 4000 B.C.

Another great civilization, the Egyptians then took it a step further by using a copper pipe system to create elaborate bathrooms. The Egyptians also had intricate irrigation and sewage systems in 2500 B.C.

It was on the island of Crete, the need for freshwater prompted the inhabitants to build rainwater cisterns in 1500 B.C that allowed for the storage of rainwater until it was needed for drinking, washing, bathing and cooking. It was also on the island that archaeologists discovered the remains of a plumbing system that was at least 3000 years old at the ancient palace of Knossos. The plumbing system included a bathtub made out of hard pottery that looked similar to the shape of a cast-iron bathtub. There was also evidence of a water closet with a seat and crude flushing device, which dated to 1000 B.C.

However, the first known “flush toilets” or latrines date back to the Roman Empire. The Roman Empire developed aqueducts, underground sewer systems, public and private baths, lead and bronze water piping systems, and marble fixtures with gold and silver fittings. The Romans had the most advanced plumbing system in the world during 500 B.C to 455 A.D. They also utilized lead pipes that made great improvements to sanitary conditions.

The Beginnings of Modern Plumbing

After most of the great empires and civilizations were no longer around, in 1455 the first iron pipe was installed in Siegerland, Germany. German craftsmen had developed a method of building fires hot enough to melt iron, which was then poured it into castings to make hollow pipes.

The first flushing water closet was then invented in 1596 by Sir John Harington, godson to Queen Elizabeth I.By the 17th Century, most of the castles had privies, a toilet located in a small out building. However, the plumbing systems would just lead the waste out into the moat that surrounded the castle. 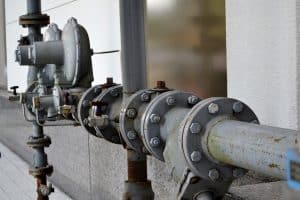 However, it was not long until plumbing became more common place, not only for royalty, but for a city full of common people. The first underground sewer was installed in 1728 as a response to the complaints health officials in New York were receiving about the smell of open sewers. The first public water main was also installed under New York streets in 1830. It was born out of the need for a readily available supply of water for fire fighting in the city. Drainage piping systems leading to these underground networks were installed into buildings between 1845 and 1850.

Since plumbing was becoming more and more common, it needed to be regulated, and thus The National Public Health Act was passed in 1848.

By the 1870s, private homes had their own water heaters. Engineers worked constantly to develop better designs and models, proving the Venting Theory, which prevented sewer gases from escaping fixture waste outlets. Manning Formula was invented in 1890, which allowed engineers to calculate flow in sloping drains.

By the 1900s, many countries had passed health and safety laws about plumbing systems, and the modern water closet had been invented by 1932.

Since then, plumbing, its development and maintenance, has become an important part of society; a part we truly can not live without.