Is the colour and taste of the water from your tap suddenly different? Depending on the age of your pipes and water heater, or the age of the pipes of the public water supply, the cause could be rust.

Before calling the plumber, you can conduct a DIY test to determine whether it is rust, and what is the source of the problem.

Water that contains a substantial amount of rust will have a distinctive metallic odor and a reddish brown appearance. The water will also stain the porcelain of your fixtures and white linens with a brownish hue. According to the University of California, rust in your water does not pose a health risk, unless you have a rare disorder called hemochromatosis, which allows the body to accumulate excessive iron levels. 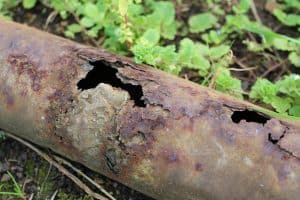 Test to Determine the Source

A DIY test to determine the source of the rust requires you to sample water from both taps of the fixture, where you first noticed the rust.

If the rusty water is only present in the hot water supply, or if the presence of rust disappears when the water is left to run for a few seconds, are both big indicators that the rust source is in your home. However, if continuous rusty water comes from both taps, you should call your local water authority immediately to report the problem, as it is most likely from old and corroding pipes that make up the neighbourhood’s underground water supply network.

How to Fix Rust